In the cell, we use exactly the same principles as the two-chamber model, except that we initially use energy or work to separate the ions from each other. This energy comes in the form of the Na-K ATPase pump. This pump moves three Na+ ions out of the cell and two K+ ions into the cell (see figure below), using ATP (energy) in the process.

This pump is found in every cell in the body. The pump creates a concentration gradient for both K+ and Na+. It causes a much higher concentration of K+ to exist inside the cell and a much higher concentration of Na+ to exist outside the cell. This results in a very large chemical gradient for K+ to leave the cell and a very large chemical gradient for Na+ to come into the cell. However, the cell membrane, under normal conditions, will not let Na+ come in (closed ion gated channels), but the membrane will allow K+ to leave (open ion gated channels). In more physiological terms, the membrane contains channel proteins for K+ and channel proteins for Na+. However, most channels are closed for Na+ and open for K+, resulting in the membrane being 50–100 times more permeable to K+ than Na+ under resting conditions.

So what? Who cares if the inside of cell membranes is negative? Note the word potential. In this state, the cell now has potential, or the separation of charge. Not every cell has the same potential. All cells have been shown to have a charge difference between the inside and outside of the two membranes. The size of this charge differs from cell to cell. For example, the resting membrane potential for a neuron is around -70mv. Although all tissues exhibit resting membrane potentials, some respond in a unique and predictable way when they are stimulated. We call these cells excitable. Excitable cells have resting potentials that range from -50mv to -85mv, while non–excitable cells have potentials that range from -5mv to -10mv. Excitable cells include neurons and skeletal muscle cells, while non–excitable cells include red blood cells. It doesn't take much imagination to see how neurons and skeletal muscle cells could be much more excitable than red blood cells.

So, how exactly does a membrane potential result in excitability? Before we can fully understand this concept, we need to revisit the concept of proteins, in particular, those proteins that reside in the cell membrane. First, what are proteins doing in the membrane? Remember, membranes are made up of phospholipids that have hydrophilic ends (love water) and hydrophobic ends (hate water). Because of the nature of phospholipids, the cell membrane is virtually waterproof. In fact, it is mostly anything-proof; that is, most things cannot cross the barrier made by phospholipids. However, we have seen that cells have proteins embedded in their membranes that can form gated channels for substances to leave or enter the cells, for instance, the K+ channel.

The K+ channel is an example of a protein that is arranged in the membrane, which acts as a passage for K+. Most channel proteins are very specific and will only allow certain things to pass through. At the simplest level, protein channels come in two basic types: those that are open most of the time (leak channels) and those that are closed most of the time (gated channels). Gated channels can be opened by several different types of stimuli. If they open in response to electrical changes, they are called voltage-gated ion channels. Those that open in response to mechanical stimulation are mechanical-gated ion channels, and those that open in response to a chemical stimulant are called chemically-gated or ligand-gated, ion channels. K+ can move through the membrane through leak channels or gated channels. Na+ can also move through both types of channels, but in most cells, there are small numbers of leak channels for Na+ and large numbers of gated channels for Na+. Under normal resting conditions, Na+ has a very large chemical gradient to enter the cell, but it cannot enter because the channel protein for sodium is closed. In fact, for most ions, their specific protein channel is closed most of the time during resting conditions.

So, what determines if a given channel will be closed or open in response to a given stimulus (i.e. voltage, mechanical, or ligand)? Proteins have many possible shapes or conformations that are dictated by which their amino acids are arranged. Consider, for example, the following hypothetical channel. 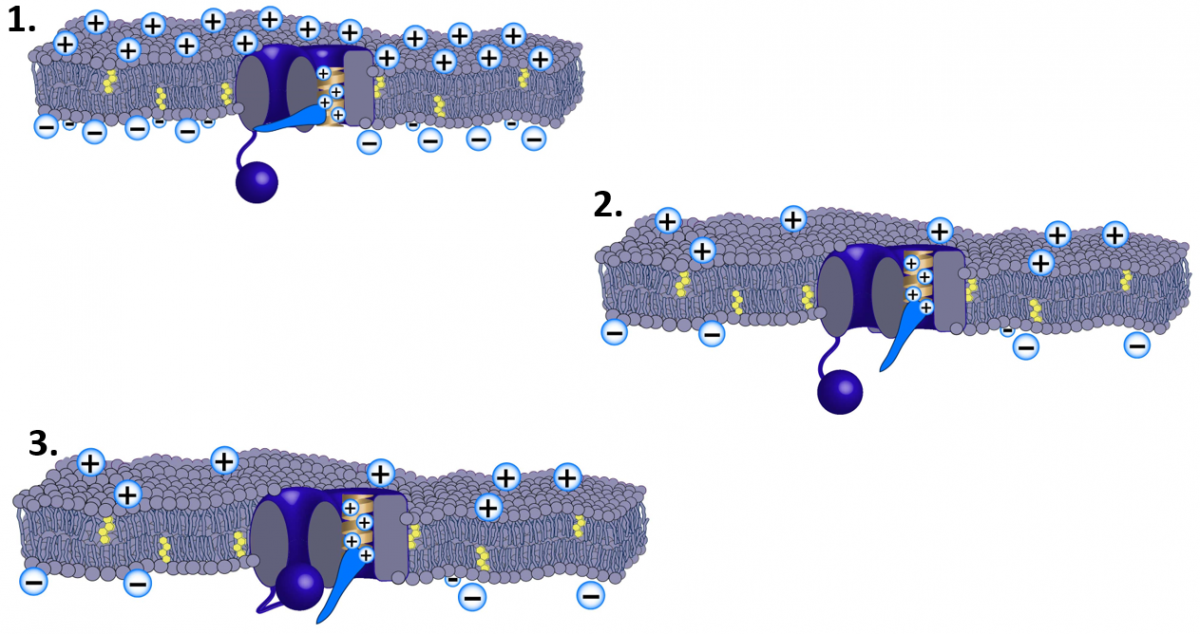 The image above is a depiction of a voltage-gated sodium channel. This depiction shows how charges on amino acids can be attracted to or repelled by the "membrane potential" and contribute to the open or closed conformation of the "gates." The light blue “lever” represents the Activation Gate and the Ball represents the Inactivation Gate

Imagine that the protein conformation is such that it acts as a channel through the cell membrane, but it has two doors: a “lever” and a “ball”.

If the charge was altered so that the inside suddenly became less negative (see number 2 in the figure above) and the outside less positive, then the spring could go up and open the lever (or activation gate). This would expose the mouth of the channel that is oriented towards the cytoplasm or inner membrane. The ball has charges on it as well that are attracted to complementary charges in the mouth of the channel (not shown in the image). A few milliseconds after the lever (or activation gate) opens, the ball (or inactivation gate) closes the channel (see number 3 in the image above).

If the channel were permeable to Na+, then Na+ could move in through the channel for a brief moment. Believe it or not, that brief moment of Na+ passing through the membrane is the basis of excitability. Our hypothetical model is an example of a voltage-gated channel. We call it voltage-gated because the gates (doors) of the protein respond to voltage or charge changes on the membrane surfaces.

Movement of Ions through Protein Channels

What happens when a channel that was normally closed is opened? When a channel is opened, even though it is for a very brief period of time (less than 0.5 msec), it allows for the specific ion to move through the membrane. What happens to the cell during this "open" time depends on the type of ion and the direction of movement, a concept called the driving force. Driving force can be expressed mathematically as:

Sometimes ions will move with their chemical gradient but against their electrical gradients and vice versa. In addition, sometime ions will move in the direction of both chemical and electrical gradients. In order to use the driving force equation to determine direction, you only need to know the valence charge of the ion in question. For example, let’s assume a Vm of -80 and an equilibrium potential (Ex) for the Ca2+  ion as 127mV. Using the driving force equation would yield a value of -207mV (ie., -80Vm - 127ECa2+ ). The driving force value should always be placed in the interior of the cell. Thus, for the Ca2+  ion (a cation) there is a -207 mV driving force intracellularly, which would act to drive the Ca2+  ion into the cell. See if you can determine the driving forces for the following ions for a cell with a Vm of -80mV. ENa+ = 67mV, EK+ = -95mV, ECl- = -89mV. The answers are given in the table.

Taking a closer look at the driving force for the K ion, since K+ is a positively charged ion, and the driving force is a positive value, making the membrane permeable to K+ will drive K+ out. Moving more K+ out will result in a loss of positive charges; hence, the cell will become negative. Each ion, if permeable, will move the Vm in the direction of the Nernst for that given ion. In the case of the K ion, if the cell were 100% permeable to K+ and only K+ the Vm of this cell would be -95mV. Recognizing that the cell is resting at -80mV suggests that the cell must be permeable to other ions and/or not 100% permeable to K+. This concept explains why a cell can become more negative by simply opening more K+ channels. In other words, since the equilibrium of K+ at the resting membrane potential was based on the membrane permeability (ie., number of open channels), opening more channels will cause K+ to move until a new equilibrium is established, with respect to the electrochemical gradient. Thus, the inside of the cell will become more negative because of the increased electrochemical gradient, reaching a new electrochemical equilibrium or until the cell reaches the Nernst for K+. Because other ions are always somewhat permeable, reaching the Nernst for K+ in the physiological system under normal conditions is probably impossible.

The Cl- ion is notoriously tricky because depending on the driving force it can induce a negative move in the Vm or a positive shift. Indeed, the nervous system uses Cl- both ways!

Recall that to determine the equilibrium potential for an ion we use the Nernst equation. In the cell example, the concentrations of K+ would yield a Nernst potential (equilibrium potential) of -95mV. Since the cell is primarily permeable to K+ a logical deduction would be that the cell must be resting at -95mV. However, the cell example is actually resting at -70mV. Why such a difference? This is because the Nernst potential assumes that only one ion is permeable and that it is completely permeable. This is one of the reasons as to why the Nernst potential CANNOT be used to predict the resting membrane potential of biological cells because the assumptions are rarely met. In reality, the cell membrane is “mostly” permeable to K+ but also “somewhat” permeable to other major ions like Na+ and Cl-. There is another equation that tries to reduce some of the assumptions by including more variables (ie., ion permeability) in the equation. It is called the Goldman-Hodgkin-Kats equation or GHK equation.

The GHK equation is a better predictor of the actual membrane potential because it includes the ion permeability, represented by P in the equation.