So far, we have alluded to the fact that acid-base imbalances can have devastating effects on the body. Since all proteins, particularly enzymes, are very sensitive to changes in pH, normal body functions can be altered by small changes in pH. For example, the activity of the enzyme phosphofructokinase, an important enzyme in glycolysis, can be reduced by as much as 90% by a change in pH as small as 0.1 pH units. The general effect of acidosis is depression of the central nervous system. This can lead to disorientation, coma and even death. Conversely, the main problem associated with alkalosis is hyper excitability of the nervous system. This can lead to muscle spasms, tetany and death due to paralysis of the respiratory muscles. Fortunately, the mechanisms discussed above do an admirable job of maintaining blood pH within the normal range under most conditions. As we examine acid-base imbalances there are two factors that we must pay close attention to.  We must closely monitor the concentrations of carbon dioxide and HCO3- in the arterial blood. Recall that these are both components of the bicarbonate buffer system.

For those curious as to why this is, we must employ the Henderson-Hasselbalch equation. This is an important equation used to define buffer systems.

As described above, as long as the HCO3- / PCO2 ratio is 20, arterial pH will be normal. Because of this, if there is a respiratory disturbance that causes the pH to drop (respiratory acidosis, PCO2 greater than 40), it can be compensated by an increase in the HCO3-. In other words, the respiratory acidosis is being compensated by a metabolic alkalosis. On the other hand, if a person is suffering from metabolic acidosis (HCO3- less than 24) it can be compensated for by a respiratory alkalosis (PCO2 less than 40). These mechanisms attempt to allow the body to maintain pH within the safe range until the underlying problem is remedied, either by the body healing itself or by medical intervention. A visual way to see how the body trys to help itself can be seen in a small change to the Henderson-Hasselbalch equation:

A patient presents at your clinic because she has been experiencing nausea for several days. As you perform your initial evaluation you note that her hands are shaking. She also explains that she feels light-headed and has experienced some periods of confusion. You run some routine labs and observe the following values. Red blood cell count and hemoglobin concentrations are within the normal ranges. Differential blood cell count reveals that white blood cells are also within normal ranges. Blood tests reveal the following values: HCO3- = 35 mmol/Liter; PCO2 = 47 mmHg; Arterial pH = 7.49. What is your diagnosis?

Up to this point in our understanding and diagnosis of acid/base disorders we have assumed that only one primary abnormality is present. However, in reality, patients often suffer from more than one disorder at a time. There are extensive diagrams and mathematical equations that have been developed to try and find all the possible disorders, but here we will present a much easier, yet still comprehensive approach to helping you diagnose “mixed” disorders. This practical approach was published by Richard Haber (Haber RJ: A practical approach to acid-base disorders. West J Med 1991 Aug; 155:146-151). With acid/base problems, the first approach (already explained above) is to identify the pH to determine the primary issue (and accompanying CO2 and HCO3- values).

To help us identify additional underlying issues we will also measure the serum electrolyte values of sodium, chloride, and HCO3- and use them to calculate a value known as the anion gap. The anion gap is the difference between the cations and anions in blood plasma.

The magnitude of the difference (gap), as will be explained, helps us to determine the cause of metabolic acidosis. The body goes to great lengths to ensure electrical neutrality, that is, the total number of cations has to be equal to the total number of anions. In the body, ions are not created equal, in fact there are four ions that outnumber the rest, they are: Na+, K+, Cl- and HCO3-. Within blood plasma, Na+ is by far the most abundant of all cations and so it is used solely to determine the cation amount. Anions are not so easily distinguished, even if we include Cl- and HCO3- in our calculations, we still don’t have enough negative charges to balance Na+. Thus, the anion gap is a number that represents the “unmeasured” anions that are needed to balance out the Na+. This is why the value is called the anion gap. In normal individuals, the cations that are measured still outnumber the measured anions (even including Cl- and HCO3- and other anions) so that gap is positive. Since we know that the body has to be electrically neutral, we deduce that the anion gap represents the unmeasured anions.

Low anion gaps can be caused by hypoalbuminemia (low levels of albumin). Albumin is negatively charged and thus acts as a major “unmeasured” anion. However, if albumin levels drop, anions like Cl-  must increase to maintain electrical neutrality. Since Cl- is a “measured” anion, the gap will decrease.

Potassium (K+) homeostasis is of vital importance, but mostly extracellular K+. Since about 98% of potassium resides intracellularly, adding or subtracting K+ from intracellular stores is hardly noticeable. In contrast, altering extracellular K+ concentrations, because the amounts are so small to begin with, results in major changes, especially regarding membrane potentials. This creates an interesting conundrum because normal daily loads of dietary K+ being absorbed from the intestine into the extracellular spaces should be lethal. To prevent this, the body deals with increasing extracellular loads of K+ in two ways; by immediately shifting K+ intracellularly and by excreting K+ by the kidneys (visited in the kidney section). Under normal physiological conditions, these two systems handle K+ very effectively, but under nonphysiologically conditions, especially those dealing with alterations in pH, K+ homeostasis is greatly affected.

Why is K+ homeostasis tied to pH? In brief, the buffering mechanisms for K+ and H+ into or out of the cell seem to be linked together. For example, to buffer the effect of hyperkalemia, cells (mainly skeletal muscle cells) take in K+ to help maintain extracellular concentrations. In doing so, extracellular H+ ion concentrations increase, inducing a state of acidosis. Thus, hyperkalemia is associated with acidosis. Vice versa, in metabolic acidosis, excess hydrogen ions are buffered by cells, but in doing so extracellular potassium ions increase, causing hyperkalemia. The opposite is true for states of hypokalemia and alkalosis. Unfortunately, this “exchange” effect for H+ and K+ is not as easy as a single transport protein (ie., H+/K+ exchanger), instead, it is the effect of at least four indirect exchange mechanisms. 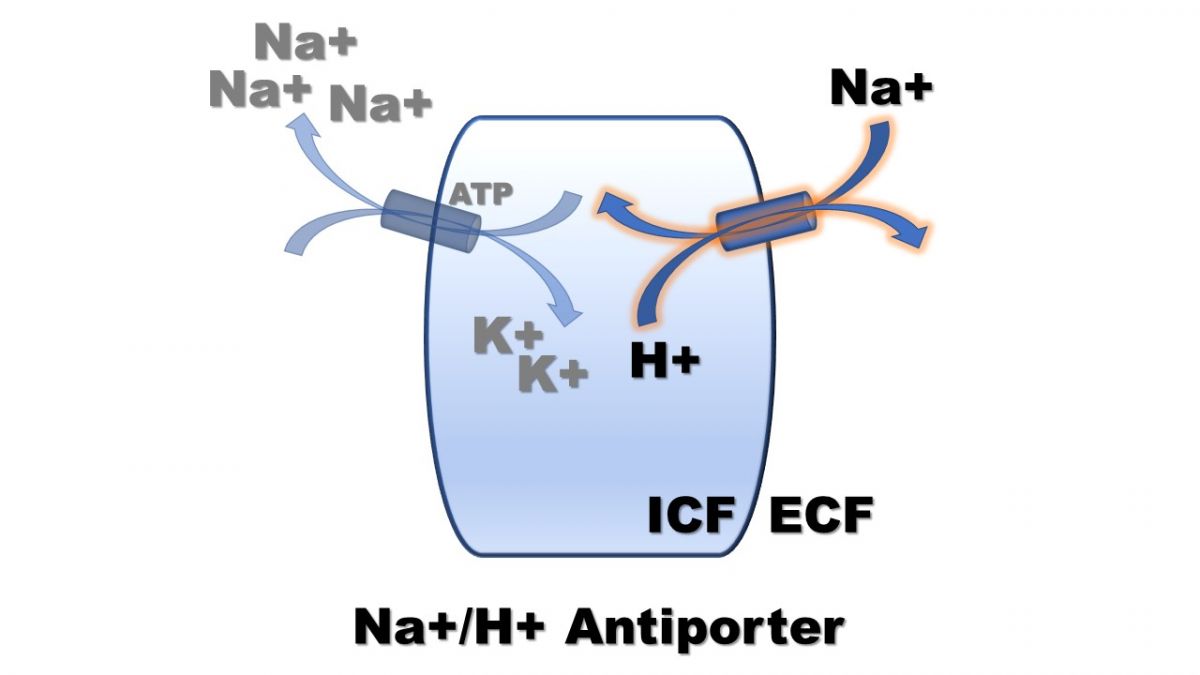 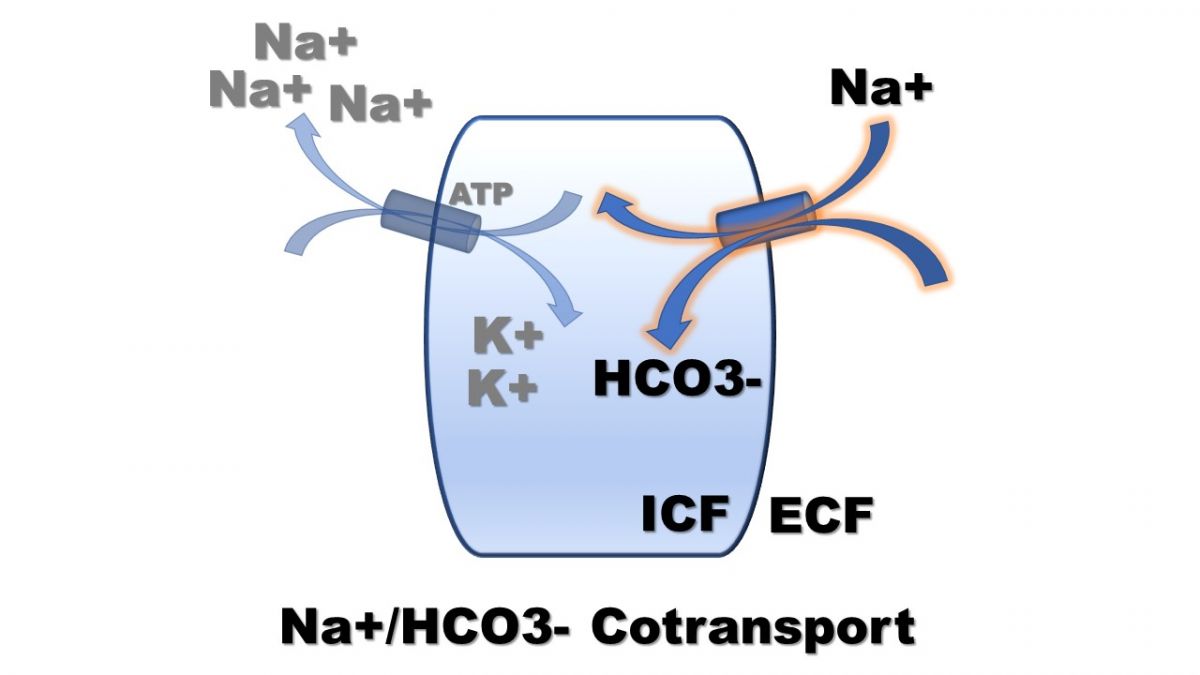 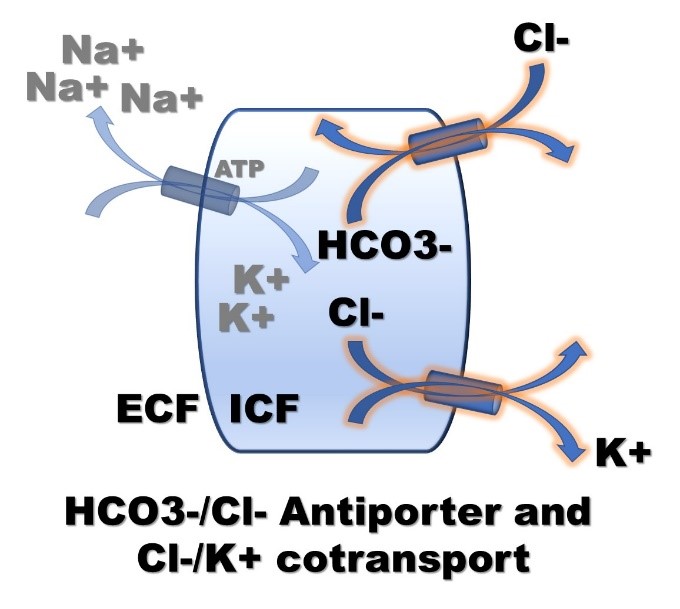 Understanding these transporters can help explain how hormones can have dramatic effects on acid-base balance. For example, excess Aldosterone can induce a state of alkalosis because of the effects on the Na/K ATPase pump. Since 3 Na+ ions are exchanged for 2 K+ ions, increasing pump activity will increase intracellular K+ concentrations, which can then induce a hypokalemic state. In response, cells will begin to release the K+ to the extracellular space, but in doing so will use the mechanism explained to shift H+ out of the extracellular to the intracellular space, thereby inducing alkalosis. Insulin also increases the activity of the Na+/K+ pump but usually does not induce hypokalemia because insulin release follows meals when the K+ load is already beginning to increase. The importance of this role for insulin is seen in type I diabetics (lack insulin) who can become severely hyperkalemic following a meal if their insulin is not injected properly.

Epinephrine/norepinephrine may contribute to hypokalemia and subsequent alkalosis as they also stimulate the Na/K ATPase pump, through interactions with autonomic receptors.

Not all types of metabolic acidosis are associated with hyperkalemia. In the case of lactic or ketoacidosis, the conjugate base (anion) can move into the cell, making a smaller driving force for K+ to exit, although some mild forms of hyperkalemia in ketoacidosis will still be observed, mainly due to the lack of insulin. Still, for some general rules, consider this table of K+ interactions.

Both respiratory alkalosis and acidosis induce small or even no changes in K+, perhaps because the respiratory system doesn’t deal directly with HCO3-, but the mechanisms as to why the change is so subtle is not yet understood.

Acid-Base and The Nervous system

In terms of the nervous system, acidosis is often (but not always) associated with hypo-excitability and alkalosis with hyper-excitability (always). This is due to the effect of protons on albumin and calcium homeostasis. Recall that the voltage-gated Na+ channel conformation is highly dependent on extracellular calcium (hyper or hypocalcemia). In hypercalcemia the voltage mechanism is inhibited so that the channel doesn’t respond well (hypo-excitable), whereas in hypocalcemic states, the channel becomes over sensitive (hyper-excitable). Finally, extracellular calcium concentrations are highly dependent upon how much calcium is bound to albumin. Thus, in acidosis, the increased proton concentration will compete with the binding of calcium on albumin. This competition will result in an increase binding of H+ ions and subsequent decrease binding in Ca++ ions thereby inducing a state of hypercalcemia and hypo-excitability. However, if the acidosis is associated with hyperkalemia, the increased K+ concentrations will alter membrane potentials, thereby inducing hyper-excitable states. This is why acidosis can be observed to be associated with hyper and hypo-excitable states. In contrast, the lack of H+ ions will cause albumin to “soak” up, or bind more calcium ions, inducing a state of hypocalcemia and a hyper-excitable state.