Factors that Influence the Force of Contraction

Obviously, our muscles are capable of generating differing levels of force during whole muscle contraction. Some actions require much more force generation than others; think of picking up a pencil compared to picking up a bucket of water. The question becomes, how can different levels of force be generated?

One way to increase the amount of force generated is to increase the number of motor units that are firing at a given time, a phenomenon called recruitment. The greater the load we are trying to move the more motor units that are activated. However, even when generating the maximum force possible, we are only able to use about 1/3 of our total motor units at one time. Normally they will fire asynchronously in an effort to generate maximum force and prevent the muscles from becoming fatigued. As fibers begin to fatigue they are replaced by others in order to maintain the force. There are times, however, when under extreme circumstances we are able to recruit even more motor units. You have heard stories of mothers lifting cars off of their children, this may not be total fiction. Watch the following clip to see how amazing the human body can be. Muscle recruitment.

Movement of the body is the result of force (measured as tension) that is generated as muscles contract. When a muscle contracts, it shortens. As the muscle shortens, it builds up tension in the tendons. If the tension is powerful enough, the tendon will pull on the bones, and the bones can act as levers to move things (like a weight in the hand). Sometimes, the muscle will contract but rather than lift the bones against a resistance, the muscle will slowly lower the bones that are already in a high energy stressed position (think about lowering yourself slowly to the ground from a full chin-up with your arms). Anytime a muscle contracts and bones are moving at all (either moving the resistance or slowly returning the resistance to a resting state), we call it an isotonic contraction. The two types of isotonic contraction are concentric (moving the resistance), and eccentric (slowly returning the resistance to a resting state). If a muscle contracts but the bones do not move at all (think about holding your fist in a clench or holding a position in a half squat), we call it an isometric contraction. To put all this together, imagine the following scenario:

Interestingly, in each of these contractions, the muscle force can increase or decrease depending on where the bones are in their overall possible range of motion. For example, if you clench your fist and also flex your wrist, your ability to pinch is reduced because muscles in the shortened position generate less force. On the other hand if you extend your wrist and fingers, your ability to pinch is decreased as well because muscles in a lengthened position generate less force. Your greatest strength occurs when your fingers and wrist are closer to the mid position. This change in force depending on the starting position of the sarcomeres is called the active length-tension relationship.

Active tension is the tension of movement and is also dependent upon length. However, the relationship is not directly proportional. Instead, tension seems to peak at a given length, before or after this length muscle tension is reduced. This ideal length is called the optimal length. When muscles are stretched or shortened outside of this range the active tension decreases (see figure above).

These observations lend support to the proposed sliding filament theory of muscle contraction, where sarcomeres are proposed to slide over each other (yes, we are still not 100% sure about this…). The graph of active tension demonstrates that at a length of 20 cm (2.0 µm), the sarcomeres are “optimally” overlapped. Said another way, if the sarcomeres overlap too much (below 2.0 µm) there is not enough room to shorten before running into the z-disc, while above 2.0 µm the sarcomeres become stretched too far so there is not enough overlap for the myosin heads to grab all possible actin active sites.

Tension can also be generated in muscles even without crossbridge interactions. We call this tension passive tension, and it is the result of the connective tissue around the muscle fibers and the structural proteins in the muscle fibers. An example of passive tension is the pull you feel in your hamstrings when trying to touch your toes. Passive tension increases as you stretch the muscle. In passive tension, length and tension are directly proportional, with increased stretch (length) correlating with increased tension (see figure below). The further a muscle is stretched the more tension is generated to oppose the stretch. 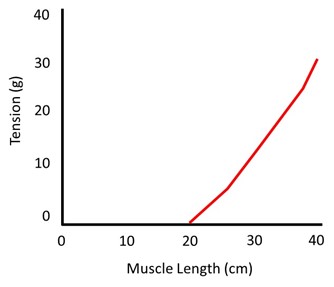 The total tension in any muscle or tendon at any point of contraction will be the total of both active and passive tension.

It has also been observed that the velocity (speed) at which a muscle can contract is highly dependent on the amount of force required to shorten it. In other words, try bending your arm fast to slap yourself in the face. Next, hang on to a milk jug, then bend your arm fast and try and hit yourself in the face again, but with the milk jug. Even your rudimentary stopwatch on your iPhone could detect that difference. Thus, in the absence of a load, your muscle can contract the fastest.

The maximum rate of contraction will be faster for fast twitch muscles when compared to slow twitch. If we increase the load to the point where shortening is not possible, then we can see the slowest velocity of crossbridge cycling (end of point C). As stated earlier, we could also lengthen the muscle beyond optimal and see force (region A), although increases in force are pretty much maxed out. 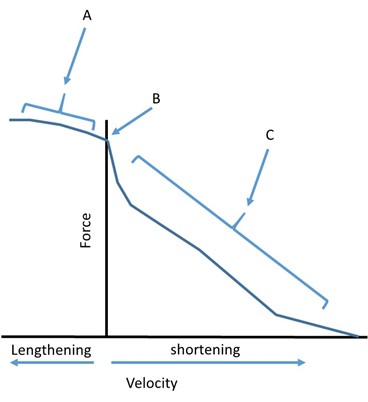