Up to this point, we have discussed one structure of the nephron (the renal corpuscle) and its relation to filtration, the first step in urine formation. We will now move our discussion to the remaining tubule compartments of the nephron. The tubule compartments of the nephron include: the proximal tubule (convoluted and straight), the descending tubule, the ascending tubule, the loop of Henle, the distal tubule (early and late) and the collecting duct. The purpose of the tubule components is to selectively reabsorb tubule fluid back into the blood. If the majority of the fluid was not recovered, the kidneys would excrete the entire blood plasma volume in about 20 minutes!

As mentioned, the capillary beds of the nephron are unique in that they form two capillary beds in succession (three in juxtamedullary nephrons). The first capillary bed, the glomerulus, functions as the site of filtration. The second capillary bed, the peritubular capillaries and vasa recta, which are associated with the tubular components, function as the site of reabsorption. Reabsorption is necessary because the process of filtration does not decipher between what is "good" and what is "bad". The filtration system only works through pressure, size and charge. Thus, things like glucose (good), that are necessary for all cells, are filtered out of the blood.

The nephron must selectively put glucose back into the blood so that it is not lost in the urine. In fact, the nephron is so efficient at reabsorbing glucose that glucose in the urine is a sure sign that things are terribly wrong in the body (diabetes). Thus, the main function of the nephron tubules is to recover most of the fluid (water) and solutes filtered at the glomerulus. Substances in the nephron can be reabsorbed one of two ways: through the cells, transcellular pathway or between the cells, paracellular pathway.

Proximal Tubule: The proximal tubule is responsible for the reabsorption of the largest fraction of filtrate. It reabsorbs about 70% of filtered NaCl and water and 100% of the filtered glucose and amino acids. Reabsorption of substances mainly occurs through secondary active transport with Na+. This transport is made possible by the activity of the primary active transporter, the Na+/K+ ATPase pump. This pump creates a large gradient for the reabsorption of Na+ which can be coupled with a variety of other substances. Because this process is protein specific it can become saturated. For example, in diabetics, the blood glucose can become so high (> 350mg/dl; normal 100mg/dl) that the reabsorption proteins in the proximal tubule can become saturated with glucose. As a result, glucose reabsorption may be incomplete since glucose reabsorbing proteins are only found in the proximal tubule. Any glucose that is not reabsorbed will be found in the urine. The Nephron has enough transporters to compensate for an increased glucose load in the blood plasma of 200 mg/dl, and anything greater will exceed the renal threshold. Each substance filtered by the nephron has an independent renal threshold value.

In the first half of the nephron (convoluted tubule) Na+ reabsorption occurs through an antiporter (NHE3) coupled to H+, or through specific symporters coupled with a variety of solutes each with their own unique specific protein transporter (Na+/glucose  or galactose (SGLT), Na+/HCO3-, Na+/amino acids, or Na+/lactate). The source of H+ is the result of the enzymatic reaction involving carbonic anhydrase and the substrates CO2 and water and the products H+ and HCO3-. This reaction, coupled with specific transporters, results in the net secretion of H+ and net reabsorption of HCO3-. All of the Na+ that enters the cell will leave the cell to the blood via the Na+/K+ ATPase pump. Other solutes use a variety of passive mechanisms to enter the blood once they are reabsorbed into the cell. Since Na+ reabsorption is coupled to so many different solutes, the aggressive reabsorption of Na+ results in a negative voltage in the lumen compared to the interstitium and blood. The negative voltage contributes to the driving forces observed for Cl- and other negative molecules to be reabsorbed. In addition, the increase in Na+ accumulation in the interstitium serves to drive the reabsorption of water both intracellularly and paracellularly. The correlation with Na+ and water reabsorption is so strong that the fluid in the lumen of the proximal tubule remains essentially isosmotic, despite the massive reabsorption or solutes and water. As water follows the Na+ gradient paracellularly it “drags” with it other ions such as Ca2+ and K+. This concept is called solvent drag.

The second half of the proximal tubule (straight tubule) not only targets Na+ but is also the main site of Cl- reabsorption. Since the first half of the tubule focused primarily on Na+ reabsorption, the concentration of Cl- increases from 105 mEq/L to 140 mEq/L in the second half. The second half uses the higher concentration of H+ (secreted during the first half) to drive Cl- reabsorption. H+ will combine with a negative base to freely move across the apical membrane only to separate again once inside the cell. The base then exits the apical cell through a specific antiporter in exchange for Cl- and the H+ through a different antiporter in exchange for Na+. Na+ leaves the cell through the Na+/K+ pump and Cl- either through a leak channel or a symporter coupled to K+.

The proximal tubule is also very important for the secretion of solutes. Secretion is defined as moving a substance from the peritubular capillaries to the kidney tubules. This can occur after the substance has passed through the glomerulus without being filtered. Interestingly, the nephron has the ability to both filter and secrete some substances. Filtering and secreting a substance greatly increases its clearance rate. This increased rate of clearance for certain substances presented an interesting problem for physicians during WWII. Penicillin was the first antibiotic drug developed that was effective against infections. During WWII, the demand for penicillin exceeded the ability to manufacture the drug. In addition, penicillin is rapidly cleared from the body because it is both filtered and secreted in the nephron. Fortunately, secretion is a very specific process that uses proteins to bind to the substance and secrete it from the peritubular capillaries into the nephron. Because of this specificity, scientists discovered that if they added another substance that competed for the same transporter as penicillin, the life span of penicillin in the body could be extended. This resulted in a longer half-life (decreased clearance rate) for penicillin and allowed the physicians to use less penicillin per soldier, thereby alleviating the manufacturing woes. Have you ever wondered why certain drugs warn against taking them in combination with other drugs? Well, consider that a drug’s dose is typically determined by age and weight. The drug amount also assumes that the kidney is working properly, thus the clearance of the drug is also considered as part of the dosing. Taking two drugs that compete for the same transporter could indirectly increase the dose of one of the drugs to lethal levels. The kidneys can also secrete substances like H+ or HCO3- to help with acid/base disorders (discussed later) or even K+ or PO4- depending on circumstances. 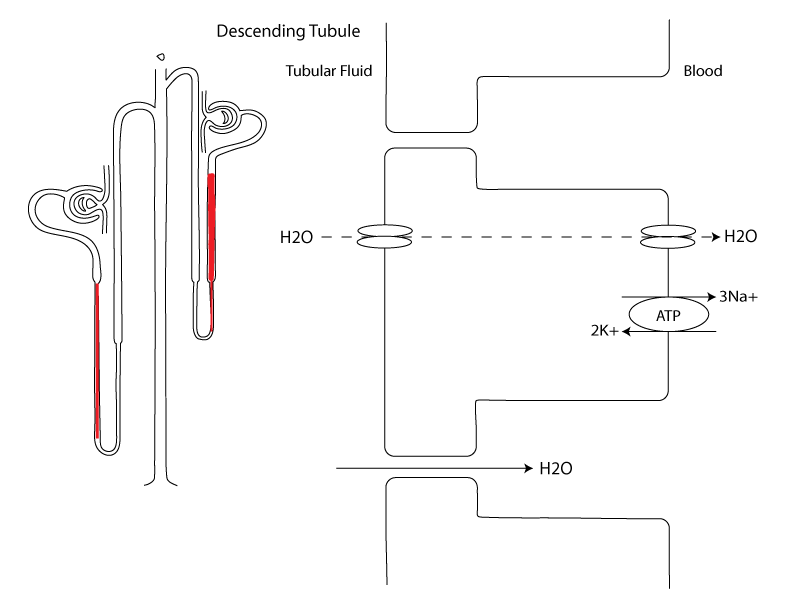 Distal Tubule and Collecting tubule: The first portion of the distal tubule (early distal) is impermeable to water but does contain a symporter for Na+ and Cl- (NCC). These cells are also called macula densa cells (explained earlier). Na+ exits the cells through the Na+/K+ ATPase and Cl- through a leak channel. There is a class of diuretics called thiazide diuretics that inhibit this symporter. 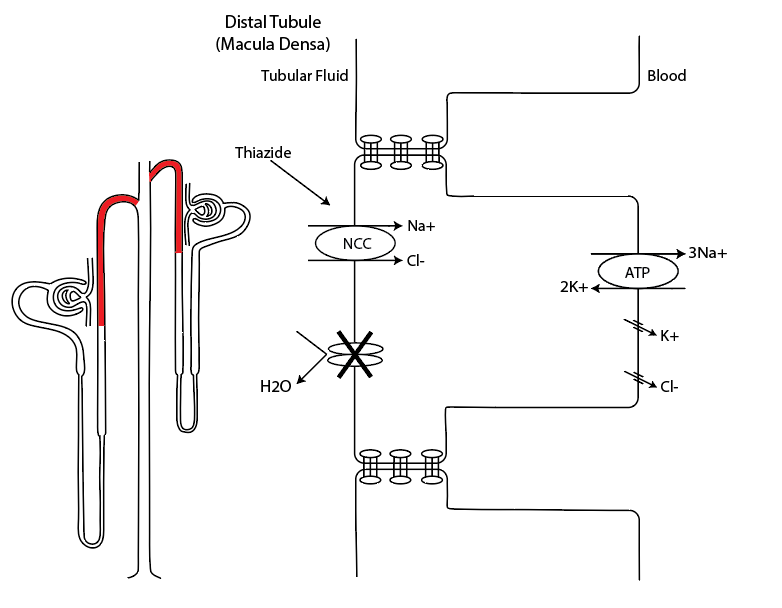 The last segment of the distal tubule (late distal) and collecting duct are composed of two cell types: principal cells and intercalated cells. Principal cells reabsorb Na+ and secrete K+ through apical leak channels and intercalated cells are essential in acid/base balance (discussed at length later). The reabsorption and secretion of Na+ and K+ in this segment is highly dependent upon the activity of the Na+/K+ ATPase pump.

Most importantly, the late distal and collecting duct are impermeable to water but have the ability insert aquaporin type II channels in response to hormones. Thus, in the absence of hormones the filtrate will become very dilute (50mOsm) and in the presence of hormones can become very concentrated (1200mOsm). The exact actions of these hormones will be discussed next.