In the second half of Chapter 3, we will consider situations in which the number of chromosomes in an individual varies (variations in euploidy and aneuploidy).

A. Changes in Chromosome Structure

We have learned that each structural gene is present as a single copy on a particular chromosome.  However, since we have two copies of each chromosome (one copy of the chromosome pair is inherited from the paternal parent; the other member of the pair is inherited from the maternal parent), each structural gene is actually present in two copies per genome. Changes to this general rule include the following (see figure 3.1):

One or more breaks in a chromosome can lead to the loss of a portion of the chromosome. This type of chromosomal aberration is called a deletion (see figure 3.2).

In general, the larger the deletion (or the more genes involved), the more severe the phenotypic consequences. Moreover, a detrimental phenotype can occur even though the individual may have a normal copy of the homologous chromosome, indicating that most deletions are dominant mutations.

The cri-du-chat individual displays mental deficiencies, facial abnormalities, gastrointestinal, and cardiac complications. Those afflicted also tend to vocalize using a catlike cry, due to defects in the formation of the glottis and larynx. 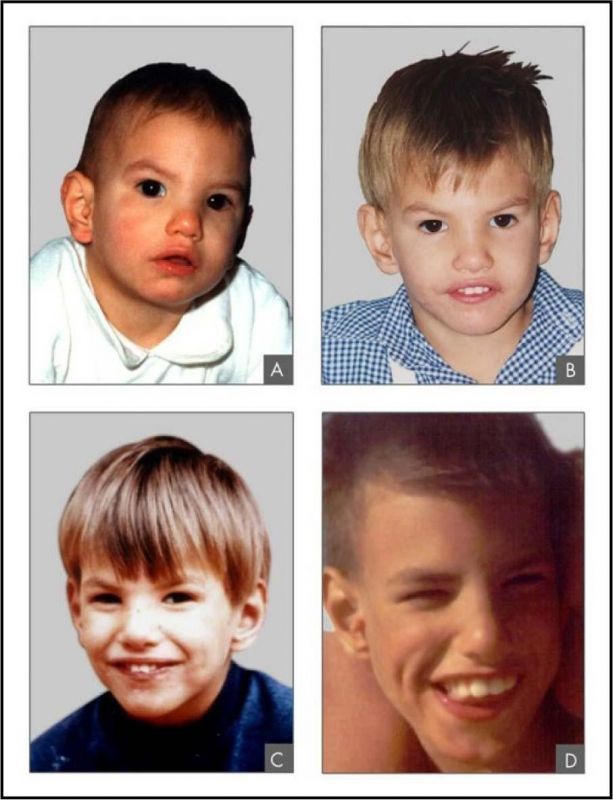 Small duplications can sometime be beneficial and are important in the formation of gene families, closely related genes that have similar but not identical functions. For example, the globin family of genes in humans is thought to have been formed by multiple duplications from a single ancestral globin gene (see figure 3.5). To form the globin gene family, the ancestral globin gene was duplicated to produce two identical genes on the same chromosome. These two genes then accumulated mutations independently over the course of thousands of generations to become specialized in their respective functions; one gene became a hemoglobin gene, the other became a myoglobin gene. Later, these two genes duplicated additional times followed by divergence through the continued accumulation of mutations. The current globin gene family, consisting of fourteen member genes, includes genes that encode the protein subunits of hemoglobin, which is specialized to carry oxygen in the bloodstream, and the protein subunits of myoglobin, which carries oxygen within muscles. The globin family of genes is a good example of how gene duplication can produce the genetic variability necessary for evolution.

Inversions involve the rearrangement of genes along a single chromosome. In essence, a portion of a chromosome has been flipped in the opposite direction. An inversion can be thought of as breaking the chromosome in two places, flipping the DNA between the breaks, and sealing the DNA breaks. The total amount of genetic material (number of genes) in the chromosome does not change. Interestingly, inversions are quite common; about 2% of the human population carries a detectable inversion.

There are two types of inversions (see figure 3.6):

Most inversions have no phenotypic consequences; however, if one of the chromosome breaks that form an inversion occurs within a gene, then a change in phenotype can occur. For example, in type A hemophilia, the breakpoint of an inversion on the X chromosome occurs within the factor VIII gene. The Factor VIII protein is required for proper blood clotting, so this inversion produces a nonfunctional protein, leading to a deficiency in clotting (hemophilia).

Sometimes the change in the position of a structural gene on a chromosome alters the transcription of the gene or other genes nearby. This alteration of gene expression by an inversion is called a position effect. In some cases, the position effect can result in the overexpression of proteins that regulate the cell cycle, producing cancer.

Crossing Over in Inversion Heterozygotes

Meiosis in Cells with Reciprocal Translocations

How do nonhomologous chromosomes that have experienced a reciprocal translocation synapse and then segregate to form gametes in meiosis I? 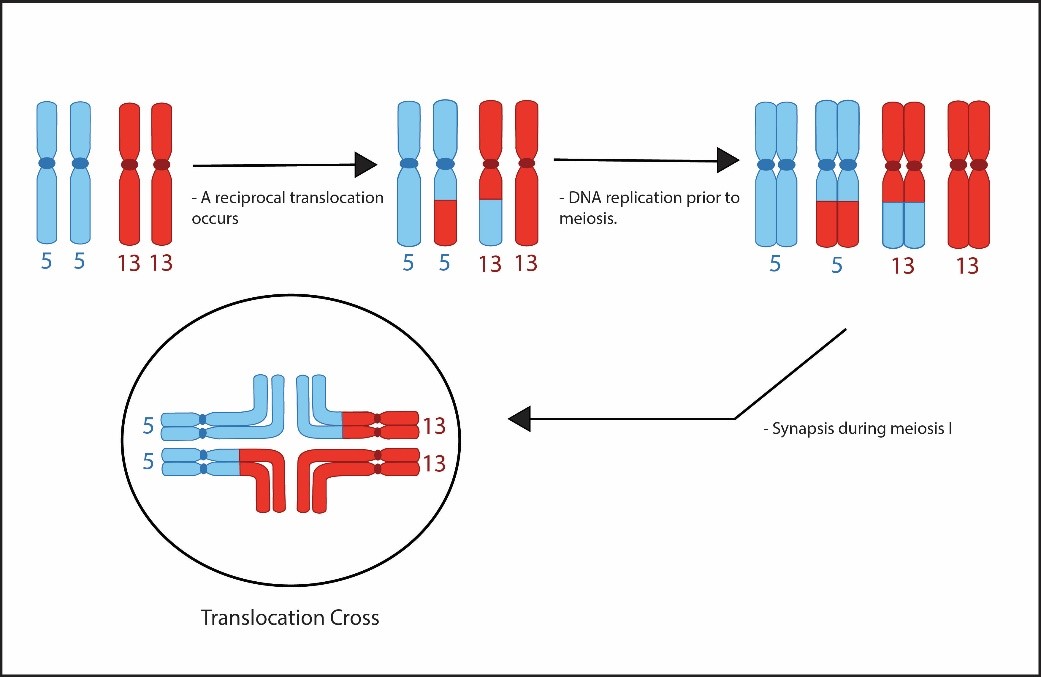 A problem occurs during meiosis in this balanced carrier individual. The three chromosomes replicate, synapse, and attempt to segregate during anaphase of meiosis I and II. There are six possible types of gametes that can be produced by the carrier individual: 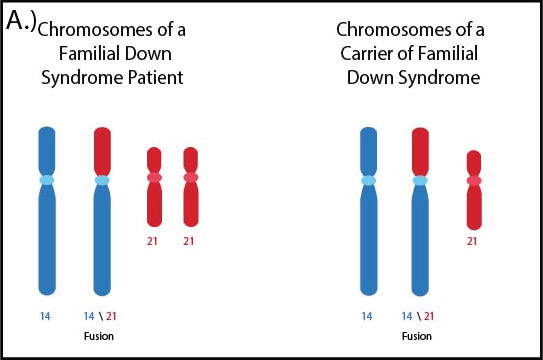 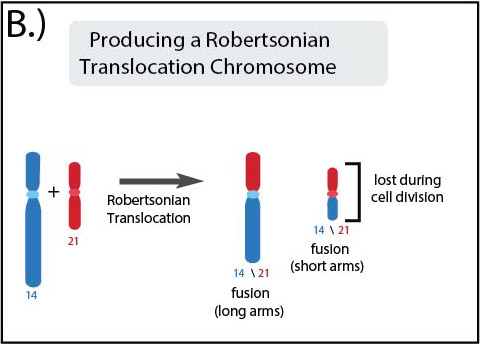 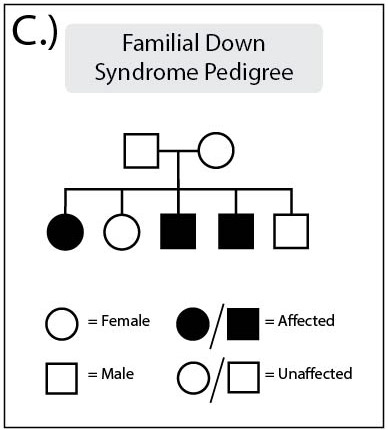 B. Changes in Chromosome Number

Sometimes the total number of chromosomes within an individual can vary. These variations in chromosome number are placed into two categories (see figure 3.12):

In trisomic individuals (three copies of a particular chromosome), the proteins produced from the three copies of the chromosome are 150% of the normal expression level. These individuals produce too much protein product, so the phenotype is negatively affected (see figure 3.12).

In the case of monosomy (one copy of a particular chromosome), the single copy of the chromosome can only produce proteins at 50% of the normal level. Since these individuals produce lower amounts of protein product, so the phenotype is negatively affected. Monosomic cells or individuals also have a second problem. In monosomic cells, recessive lethal alleles cannot be “masked” by the normal, dominant allele from the homologous chromosome.

In a trisomic or monosomic individual, the overproduction or underproduction of the protein products of hundreds of genes generally decreases the viability of these individuals.  It is worth noting that there are many natural varieties of plants that have variations in euploidy or aneuploidy, indicating that plants can better tolerate variations in chromosome number than most animals.

About 30% of all fertilization events in humans produce an embryo that is aneuploid. In most cases, the embryo does not survive. That being said, there are several aneuploid human conditions that result in live births.  These aneuploid conditions in humans include:

The aneuploid conditions described above are the result of chromosome nondisjunction, a defect in chromosome segregation during meiosis (see below).

Some tissues in an animal can contain cells that have more than two chromosome sets, whereas the somatic cells in the rest of the animal are diploid. This situation is called endopolyploidy. For example, human liver cells can vary in euploidy (some cells are 4n, 8n, or 16n). Endopolyploidy allows liver cells to increase the production of proteins encoded by genes on these chromosomes to meet the metabolic demands placed on the liver.

The fruit fly Drosophila is a diploid organism containing four pairs of homologous chromosomes. However, the salivary glands of the fruit fly contain higher variations in euploidy. To produce so many copies of the same chromosome, the homologous chromosomes pair with each other and then undergo several rounds of DNA replication without cell division. Replication in this way produces a polytene chromosome, a bundle of attached sister chromatids that lie parallel to each other.

Nondisjunction occurs when chromosomes do not separate properly in anaphase of either meiosis or mitosis.

The aneuploid human conditions discussed above (conventional Down syndrome, Klinefelter syndrome, Turner syndrome, etc.) are thought to be produced from either meiosis I or meiosis II nondisjunction.

On rare occasions, all chromosomes in a cell fail to separate properly during either meiosis I or II. This event is called complete nondisjunction and produces diploid gametes. If a diploid gamete fuses with a normal gamete, a triploid offspring is produced.

Fill in the Blanks: