A. Experiments that Established DNA as the Genetic Material

The physician Frederick Griffith was interested in developing a vaccine against the bacterium Streptococcus pneumoniae, one of the major causes of pneumonia, ear infections, and meningitis in children.

In 1928, Griffith showed the following in his experiment (see figure 5.1):

In this final experiment, Griffith reasoned that some chemical component released from the heat-killed smooth (type S) bacteria was internalized by the rough (type R) bacteria.  This chemical could change phenotype, converting the rough (type R) bacteria into smooth (type S) bacteria (transformation). The transformed bacteria then passed the type S trait to their progeny. Thus, the chemical responsible for transformation (in other words, the transforming principle) had properties of the genetic material (can change phenotype, is inherited); however, the actual chemical responsible for transformation was unknown.

DNA is the Genetic Material of S. pneumoniae

Avery and colleagues concluded from these experiments that DNA (not RNA, not protein) was the chemical responsible for transforming rough bacteria into smooth bacteria in Griffith’s experiment. Therefore, DNA is the genetic material of the bacterium S. pneumoniae.

DNA is the Genetic Material of Bacteriophage T2 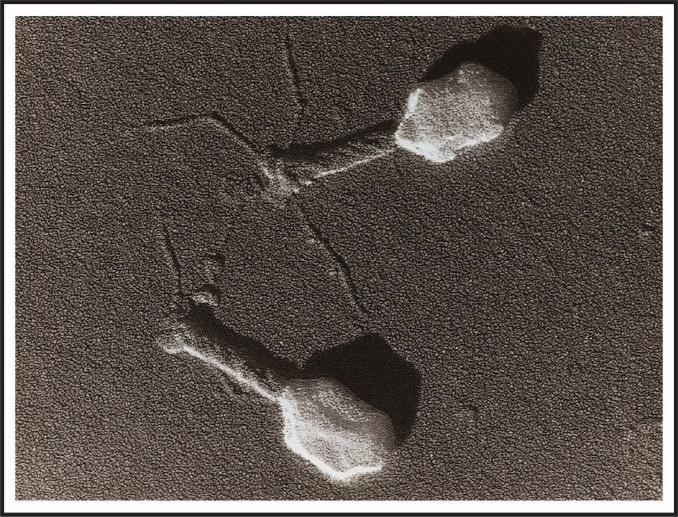 The Hershey and Chase experiment relied on two important ideas:

The Hershey and Chase experiment was done as follows (see figure 5.4):

DNA is the Genetic Material of Eukaryotes

Several lines of indirect evidence suggest that DNA is the genetic material of eukaryotic cells. Scientists reasoned that the genetic material of eukaryotes should be found within chromosomes because chromosomes are copied and distributed to daughter cells during mitosis and meiosis. Chromosomes contain both proteins and DNA; however, the DNA component is found exclusively in chromosomes (protein is found in the cell cytoplasm as well). In addition, a diploid cell, which contains twice as many chromosomes as a haploid cell, also contains roughly twice as much DNA as a haploid cell. No such correlation was observed when the protein content of haploid and diploid cells was compared. Finally, ultraviolet light (UV light) causes mutations that can affect the phenotype of a cell. The wavelength of UV light that produces the highest frequency of mutations (260 nanometers) corresponds to the wavelength of UV light that is absorbed most strongly by DNA. On the other hand, the wavelength of UV light absorbed most strongly by proteins (280 nanometers) does not produce mutations.

B. The Structure of DNA and RNA

A nucleotide is composed of the following (see figure 5.6):

Determining the Structure of the Double Helix

James Watson and Francis Crick were awarded the Nobel Prize in 1962 for determining the double helix structure of DNA; however, their work was built upon the contributions of other noteworthy scientists (see figure 5.8).

The structure of the DNA double helix could not have been determined without an important laboratory technique called X-ray diffraction. X-ray diffraction involves subjecting a substance, such as DNA, to X-rays. When the X-rays pass through the DNA, the atoms within the DNA diffract the X-rays to produce a unique pattern. This pattern can be interpreted using mathematics to determine the location of every atom within DNA. Rosalind Franklin and Maurice Wilkins used X-ray diffraction to determine that DNA has a helical structure, a diameter of 2 nanometers (2 nm) suggestive of two nucleic acid strands, and 10 base pairs (bp) per turn of the helix.

Watson and Crick used the observations/approaches of Pauling, Franklin, Wilkins, and Chargaff to build a ball-and-stick DNA model with the following features:

Structure of the DNA Double Helix

You can predict the sequence of one strand of DNA if you know the sequence of the other strand. If one DNA strand is 5’-GCCATG-3’, then the opposite strand is 3’-CGGTAC-5’. The two strands are said to be complementary (see figure 5.10).

Other Features of DNA

The backbone of the DNA double helix is right-handed, meaning that the backbone turns in a clockwise fashion as you look down the axis of the DNA molecule. Within the central part of the double helix, the bases form hydrogen bonds (A with T; G with C). The base pairs themselves are flat (planar) and appear to stack on top of each other, much like the stairs of a spiral staircase. On the outside of the DNA double helix, there are major and minor grooves where the nitrogenous bases are directly exposed to the environment (see figure 5.9 above). Proteins that bind to base pairs within the DNA interact mainly with the major groove and to a lesser extent with the minor groove. These proteins bind to the double helix to control DNA replication and transcription.

The structure of the DNA double helix detailed above is the standard form of DNA (B DNA). B DNA is the predominant form of DNA that is found in aqueous environments, including living cells. There are two alternative forms of DNA, called A DNA and Z DNA (see figure 5.11).

The A form of DNA can be produced in the laboratory under high salt (dehydrating) conditions. The A DNA structure is more compact than B DNA, has 11 base pairs (bp) per turn of the helix, and is 2.3 nm wide. Like B DNA, A DNA is a right-handed double helix; however, while the base pairs are perpendicular to the axis of the double helix in B DNA, the base pairs in A DNA are tilted relative to the axis of the molecule.

The Z form of DNA is a left-handed double helix, has 12 base pairs per turn of the helix, and is only 1.8 nm wide. Z DNA is favored over B DNA when cytosine bases are modified by the addition of methyl (-CH3) chemical groups. The functional significance of Z DNA is unknown; however, Z DNA may form within living cells.  Z DNA formation near a particular gene may influence whether the gene can be activated by transcription to produce an RNA molecule.

Since RNA molecules are single-stranded, there is the possibility that nitrogenous bases in one part of an RNA molecule can form base pairs via hydrogen bonding with nitrogenous bases in another part of the same RNA molecule. This base pairing forms short regions of double-stranded RNA. One important RNA structure formed in this way is a stem-loop (hairpin loop). Transfer RNA (tRNA) molecules, which play a critical role in the translation process, are noteworthy because each tRNA contains three stem-loop structures (see figure 5.12).

Fill in the Blank: