A. Transcription in Bacteria

What factors determine whether a structural gene is expressed; in other words, the gene is activated to make a mRNA molecule?  Expression requires the interaction between transcription factor proteins and specific DNA sequences near the gene.

The DNA sequences that regulate the expression of a particular gene include the following (see figure 9.1):

Transcription produces an RNA molecule that is complementary to the template or antisense strand of DNA. The other DNA strand, the one that forms hydrogen bonds with the template DNA strand, is called the coding or sense DNA strand. The coding DNA strand is identical in sequence to the RNA transcript, except that the RNA molecule contains uracil (U) instead of thymine (T).

Transcription in the bacterium E. coli has the following three stages (see figure 9.2):

The bacterial promoter is located adjacent or upstream of the gene to be transcribed and serves as a docking site for the sigma (σ) factor protein and later RNA polymerase. Important DNA sequence elements within the promoter are numbered in relation to the +1 site, the first nucleotide in the template DNA strand that is transcribed (see figure 9.3). Important DNA sequence elements within the bacterial promoter include the following:

In E. coli, the RNA polymerase core enzyme is composed of five protein subunits (α1, α2, β, β’, and ω) (see figure 9.4). The two α subunits and the ω subunit function to assemble the enzyme and bind to the DNA sequence to be transcribed. The RNA molecule is synthesized between the β and β’ subunits.

While the RNA polymerase core enzyme is synthesizing RNA, an RNA-DNA double helix molecule is formed within the active site of the enzyme. Transcriptional termination involves the weakening of the hydrogen bonds within this RNA-DNA double helix, resulting in dissociation of the RNA and the RNA polymerase core enzyme from the DNA.

B. Transcription in Eukaryotes

Transcription is one of the most important biological processes in a eukaryotic cell, as the activation of transcription allows eukaryotic cells to adapt to environmental changes (for example, the presence or absence of a hormone or growth factor). Moreover, many eukaryotic organisms are multicellular, so genes need to be transcribed at the right time during development or in the correct cell type. For example, genes involved in building the central nervous system should be transcribed when the nervous system is forming during development. Genes that encode proteins involved in muscle contraction should be transcribed in muscle cells and not transcribed in other cell types, such as neurons or white blood cells. These phenotypic differences are due to differences in transcription, as all cell types in the body contain an identical collection of genes.

The transcription of eukaryotic genes is controlled by several types of DNA sequence elements, including the following (see figure 9.8):

For a eukaryotic gene to be transcribed, the TATA box and the +1 site must be present. If these two sequences are the only DNA sequences present upstream of a gene, the gene is transcribed at a low, yet constant rate, the so-called basal level of transcription.

In eukaryotes, there are three types of RNA polymerases that handle transcription:

There are two general categories of transcription factor proteins:

A large multi-subunit protein complex called mediator regulates the interaction between RNA polymerase II and the activator and repressor proteins. Mediator thus serves as a link between transcription factors that bind to enhancers and silencers and RNA polymerase II, thereby determining the overall rate of transcription. 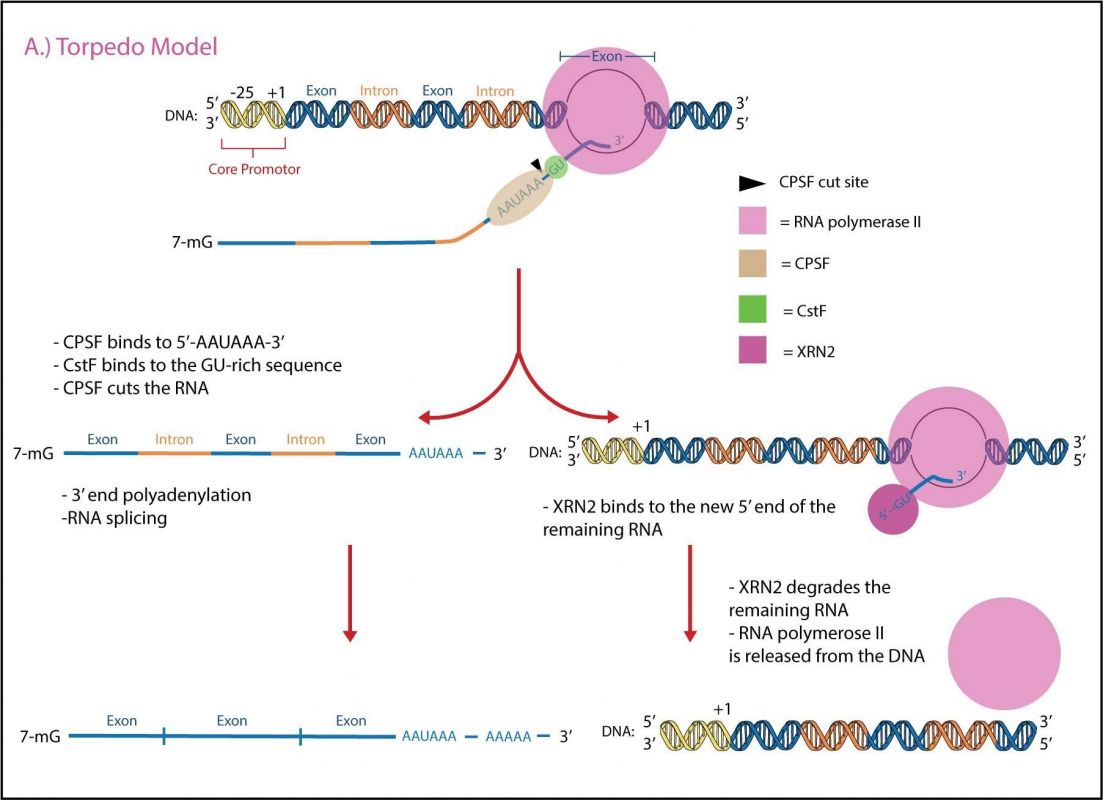 Fill in the blank: