A. Introduction to Translation

Translation is the cellular process that converts the language of nucleic acids (A, U, G, C) contained within the mRNA molecule into the language of amino acids (met, ala, his, etc.) in a synthesized protein. This translation process relies on a genetic code that converts nucleic acid sequence into amino acid sequence. Note that the genetic code that is translated into protein functions within the mRNA molecule, not in the DNA.

There are 20 different types of amino acids typically incorporated in proteins; however, there are 64 possible combinations of four nucleotides (A, U, G, and C) in a triplet codon. As a result, there are more codons than amino acid possibilities (see figure 11.2). Thus, the genetic code is degenerate, meaning that more than one codon can encode a particular amino acid type.  For example, the amino acid valine (val) is encoded by four codons (5’-GUU-3’, 5’-GUC-3’, 5’-GUA-3’, and 5’-GUG-3’) that differ only in the 3’-most base (wobble base).  These four valine codons are called synonymous codons.

The genetic code is also unambiguous, meaning that a particular codon sequence only encodes one type of amino acid. For example, the codon 5’-AAA-3’ always encodes the amino acid lysine (Lys). Further, the genetic code is commaless, meaning that codons are read by the ribosome consecutively one after another as triplets, with no spacer nucleotides between the codons. The codons are also nonoverlapping, meaning each nucleotide in the coding region of the mRNA is a member of only one codon. Finally, the same genetic code is used in all organisms (in other words, the code is universal).

All types of tRNA molecules have similar structural features (figure 11.4):

The catalytic mechanism of an aminoacyl-tRNA synthetase is as follows (see figure 11.5):

Most synonymous codons (codons that encode the same amino acid) have identical bases at the first two nucleotide positions (the 5’-most base and the middle base of the codon). These first two bases obey the AU/GC base pairing rules when forming hydrogen bonds between the codon and the anticodon. Degeneracy in the genetic code typically occurs at the 3'-most base within the codon. The 3’-most base in the codon does not have to form conventional base pairing interactions with the 5’-most base of the anticodon, leading to “wobble.” The rules that govern codon-anticodon at this wobble position interactions are called the wobble rules (see Table 11.1).

A group of tRNA molecules, with slightly different anticodon sequences, which can recognize the same codon are called isoacceptor tRNAs. For example, suppose we have the codon 5’-UUU-3’. A tRNA containing either 3’-AAA-5’, 3’-AAG-5’, or 3’-AAI-5’ anticodons can recognize this codon, according to the wobble rules (see Table 11.1). Note that these isoacceptor tRNAs are charged by the same aminoacyl-tRNA synthetase and bear the same amino acid. Alternatively, a tRNA with the 3’-GGU-5’ anticodon can recognize two codons: 5’-CCA-3’and 5’-CCG-3’ according to the wobble rules.  Both codons encode proline.

Why would a cell use this wobble phenomenon? Wobble gives the cell tremendous flexibility in codon:anticodon interactions.  A single mRNA codon can be recognized by more than one tRNA anticodon, and a single tRNA anticodon can bind to more than one mRNA codon.  This flexibility allows a cell to save energy in the synthesis of tRNA molecules. Instead of assembling 61 different types of tRNA molecules (one type for each possible sense codon), a cell can get away with synthesizing only 30-40 types of tRNA molecules, with several tRNA types recognizing multiple codon sequences.

The ribosome is the central figure in the translation process. The ribosome binds to the mRNA, serves as a site for mRNA codon - tRNA anticodon recognition, breaks the covalent bond between the 3’ end of the tRNA and the amino acid, and synthesizes peptide bonds between amino acids.

A single bacterial cell is thought to contain 10,000 ribosomes (70S ribosomes). Note that the “S” designation of ribosomes is named after the scientist Theodor Svedberg and correlates roughly with the overall three-dimensional shape of the ribosome component; the larger the molecule, the larger the “S” value.

The 70S ribosome consists of the following subunits (see figure 11.6):

The 80S ribosomes in the cytosol consist of the following (see figure 11.7):

The process of translation initiation in eukaryotes is as follows:

3. Identification of the start codon. The 40S ribosomal subunit and associated factors start at the 7-mG cap and move 5’ to 3’ along the mRNA looking for a start codon. This scanning process requires the cleavage of ATP. Not all possible start codons (5’-AUG-3’) are chosen to initiate translation. The 5’-AUG-3’ that is chosen is within the consensus sequence 5’- GCC (A or G)CCAUGG – 3’. This consensus sequence is the Kozak sequence. When the tRNAmet forms hydrogen bonds with the start codon, tRNAmet is in the P site of the ribosome.

4. Addition of the 60S ribosomal subunit to form the active 80S ribosome. 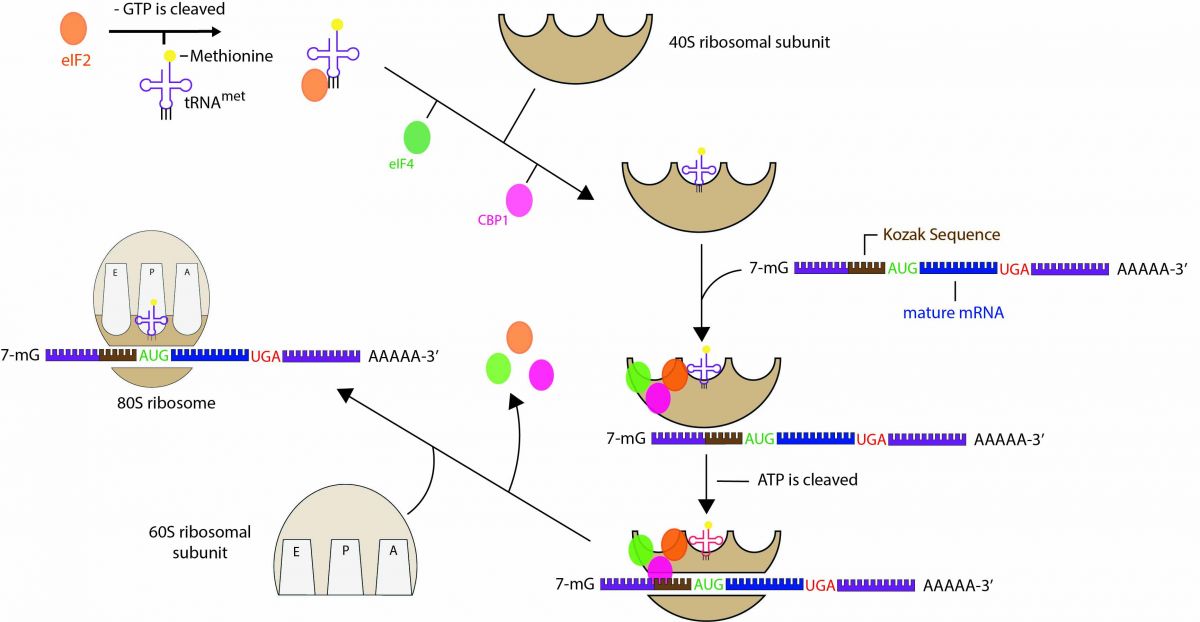 Translation elongation in bacteria involves a series of cycles, one cycle per sense codon in the mRNA. At the beginning of each cycle, a growing polypeptide chain attached to a tRNA molecule is located within the P site of the ribosome (see figure 11.12). The A and E sites of the ribosome are empty. Each elongation cycle then proceeds as follows:

Translation elongation works similarly in both prokaryotes and eukaryotes. Below are some differences to keep in mind for eukaryotic translation:

Polysomes and Coupled Transcription and Translation