Epigenetics involves cellular processes that alter the expression of genes and change the phenotype of an individual; however, these processes do not alter the nucleotide sequence within the DNA. As a result, epigenetic changes are not considered to be mutations. Instead, epigenetic mechanisms modify the structure of chromatin surrounding a gene or, in one case, alters the structure of an entire chromosome. These structural modifications to the chromatin or a chromosome either activate or silence transcription.

Epigenetic changes established during embryonic development include X chromosome inactivation (XCI), and the processes that govern the differentiation of embryonic cells into adult cell types such as muscle cells and neurons. Environmental factors that influence epigenetic changes include diet, stress, the unique environment of space, and the toxins found in cigarette smoke.

Genomic imprinting involves inheriting a silenced gene from one parent. Since the active copy of the gene is inherited from the other parent, genomic imprinting causes the offspring to only express one of the two possible alleles for a trait (monoallelic expression). The genomic imprint (in other words, the DNA methylation pattern) is established on the allele during the formation of gametes in one of the parents, is passed on to the offspring, and is retained throughout the lifetime of the offspring.

The two crosses described above violate Mendel’s laws of inheritance; the two crosses produce offspring with the same genotype (Igf2 Igf2-), yet have different phenotypes.

During oogenesis (formation of egg cells), both the ICR and the DMR sequences are unmethylated. The absence of methylation allows CTC-binding factor (CTCF) proteins to bind to CTC sequences (cytosine-thymine-cytosine trinucleotide sequences) within both the ICR and the DMR. The CTCF proteins bound to the ICR sequence and the CTCF proteins bound to the DMR sequence also bind to each other, forcing a loop to form in the DNA. This loop contains the Igf2 gene. When the Igf2 gene is found within a DNA loop, an activator protein fails to bind to the enhancer next to H19. As a result, the Igf2 gene is transcriptionally silenced in egg cells.

During spermatogenesis (formation of sperm cells), the ICR and DMR sequences are methylated by de novo methylation. CTCF proteins do not bind to methylated ICR and DMR sequences, preventing the formation of a DNA loop containing the Igf2 gene. In the absence of loop formation, an activator protein binds to the enhancer next to the H19 gene. As a result, the Igf2 gene is transcribed in sperm cells. Note that even though DNA methylation usually silences a gene (see Part 14); in the case of the Igf2 gene, DNA methylation leads to transcriptional activation!

Genomic imprinting plays an important role in two genetic diseases in humans: Angelman syndrome (AS) and Prader-Willi syndrome (PWS). AS patients are thin, hyperactive, display mental deficiencies, have involuntary muscle contractions, and seizures. PWS patients have an uncontrollable appetite, obesity, diabetes, small hands/feet, and like AS patients, have mental deficiencies.

The XCI process is thought to occur as follows (see figure 15.6, zoom in to view details):

Fragile X syndrome is the most common form of inherited mental retardation, affecting 1 in 4000 males and 1 in 8000 females. Fragile X syndrome is named because of a site on the X chromosome that does not stain well and looks like a gap (see figure 15.7). This gap region tends to be susceptible to chromosome breakage and is therefore called a fragile site.

A type of mutation called a trinucleotide repeat expansion (TNRE) is thought to be responsible for fragile X syndrome. In the TNRE that causes fragile X syndrome, the number of copies of a 5’-CGG-3’ sequence increases from generation to generation due to errors in DNA replication. When the number of 5’-CGG-3’ trinucleotides exceeds 230 copies, disease symptoms are produced. Recall that a TNRE is also responsible for Huntington’s disease (see Part 7). 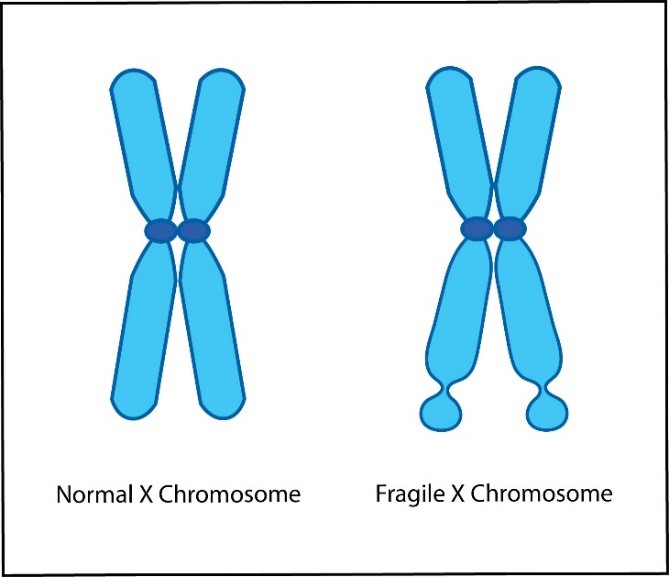 Epigenetic processes are important in the development of multicellular organisms. Embryonic development, starting with a fertilized egg and eventually producing an entire adult organism, initiates with the activation of genes that produce the overall body plan. For example, a group of genes called Hox genes specify the structures that form along the anteroposterior axis in animals. The Hox genes are actively transcribed during embryonic development when body parts are forming; the Hox genes are not transcribed in the cells of an adult organism. Epigenetic factors permanently silence Hox genes after the Hox gene products have been used to help form the body plan.

Two protein complexes, called the trithorax group (TrxG) and the polycomb group (PcG), are thought to regulate the epigenetic changes that occur during embryonic development and the differentiation of tissue types. The TrxG complex is involved in gene activation processes, while the PcG complex is involved in gene silencing processes. The TrxG and PcG complexes are both histone methyltransferases, which accomplish epigenetic changes by adding methyl groups to the tail domains of histone H3. The TrxG complex recognizes histone H3 and adds three methyl groups (trimethylation) to a lysine amino acid at position 4 within the histone tail. Trimethylation of lysine 4 within histone H3 is an activating epigenetic mark. PcG also recognizes histone H3 and adds three methyl groups to a lysine at position 27; however, this modification to lysine 27 is a silencing epigenetic mark.

We will now consider how a PcG complex silences transcription, by describing how the Hox genes are inactivated after the Hox gene products have been used to help determine the body plan during embryogenesis (see figure 15.8).

It is important to note that the epigenetic silencing of the Hox gene is maintained during subsequent cell divisions, ensuring that epigenetic changes that occur during embryonic development are transmitted to the cells of the adult organism.

The Agouti Phenotype in Mice

One of the best examples of how environmental changes can influence epigenetics involves the transcription of the Agouti gene in mice. The protein product of the Agouti gene is involved in the formation of yellow pigment in the hairs of developing mice pups.

The Agouti Phenotype is Influenced by Diet and Bisphenol A

Another environmental agent that affects the Agouti phenotype is the chemical bisphenol A (BPA), a chemical found in some plastics. The exposure of pregnant female mice to BPA produces more heterozygous offspring that have yellow coat color and are obese compared to the heterozygous offspring of mice not exposed to BPA. BPA is thought to inhibit the DNA methylation process, resulting in low levels of CpG island methylation near the Avy allele. As a result, the Avy allele is overexpressed in these mice, producing the yellow coats and obesity. Incidentally, the addition of folic acid and vitamin B12 to the diet of these pregnant mice counteracted the effect of BPA.

Cancer is a condition characterized by uncontrolled cell division. Multiple mutations are typically required to convert a normal cell into a cancerous cell. If some of these mutations occur in the genes that make DNA methyltransferase, histone acetyltransferase (HAT), histone deacetylase (HDAC), histone methyltransferase, and histone demethylase, the epigenetic markings of many genes are altered. As a result, these mutations have epigenetic consequences, ultimately producing genes that are either overactive or not expressed sufficiently. For example, higher than normal expression of certain genes called oncogenes can result in higher rates of cell division, promoting cancer. Alternatively, lower than normal expression of cancer-preventing genes called tumor-suppressor genes can also promote the formation of cancer.

Mutations in the genes involved in DNA methylation have been associated with certain cancers. For example, mutations in the gene that produces DNA methyltransferase have been associated with acute myeloid leukemia. Note that the result of these mutations would be decreased methylation of the CpG islands adjacent to many genes, including oncogenes. As a result, these mutations could lead to higher oncogene transcription and higher rates of cell division.

Mutations in the genes involved in histone modifications have also been linked to certain cancers. For example, mutations in the genes that produce HATs have been associated with colorectal, breast, and pancreatic cancer. In this case, the defective HAT would result in lower expression of many genes, including tumor-suppressor genes.   Since tumor suppressor genes inhibit cancer genes, the overall effect is a higher rate of cancer formation.

Additionally, certain chemicals are known to produce the epigenetic changes associated with cancer. For example, the polycyclic aromatic hydrocarbons (PAHs) found in tobacco smoke are associated with lung, breast, stomach, and skin cancer. These PAHs are thought to contribute to cancer by altering the DNA methylation patterns adjacent to many genes, including oncogenes and tumor-suppressor genes.

As we have seen, epigenetic processes are associated with several human diseases (AS, PWS, fragile X syndrome, certain cancers). Scientists and physicians are interested in the possibility of treating diseases by converting the abnormal methylation or acetylation patterns in diseased cells back to the normal state. These types of restorative changes in epigenetic patterns are called epigenetic therapy.

Inhibiting the DNA methylation process could reactivate silenced tumor suppressor genes in some of the cancers mentioned above. One way to do this is to use DNA methyltransferase inhibitors, such as 5-azacytidine. Similarly, histone deacetylases (HDACs) remove acetyl groups from histone tails, potentially silencing tumor suppressor genes. HDAC inhibitors, such as phenylbutyric acid, could reverse this effect, activating the silenced genes.

The Epigenomes of Identical Twins are Not Identical

Twin studies suggest that environmental factors influence the epigenetic patterns within the genome and may explain why individuals with the same DNA sequence do not necessarily have the same overall phenotype. For example, if one twin has been diagnosed with schizophrenia, the identical twin has only a 40-50% chance of having schizophrenia, despite the twins having the same genome DNA sequences. This difference in phenotype may be explained by the different environmental factors encountered by each twin during their lifetime, resulting in distinctive epigenetic patterns in each genome.

Another example of how the environment can influence the epigenomes of identical twins involves Scott and Mark Kelly (see figure 15.11). Scott spent a year on the International Space Station, while his twin brother Mark stayed home. A recent NASA study showed that time in space altered the expression of many of Scott’s genes, including those genes involved in response to hypoxia (oxygen depletion) and inflammation. Moreover, the expression of approximately 7% of Scott’s genes has not returned to baseline levels even after spending several years on Earth since his time on the space station. This alteration in Scott’s gene expression is thought to be the result of epigenetic changes resulting from the unique environment of outer space.