The first reading assignment this semester examines the general features and organization of the chromosomes found within viruses, prokaryotic cells (bacteria), and eukaryotic cells (fungi, protozoa, algae, plants, and animals).

The genetic material (genome) of viruses can be composed of either RNA or DNA. A single virus type never has both DNA and RNA in the same virus particle.

The genomes of viruses can be in several forms:

The genomes of viruses can be circular or linear. One way to determine if a viral genome is circular or linear is to isolate the viral genome and treat the genome with nucleases, enzymes that digest (cut) DNA or RNA. There are two types of nucleases. Exonucleases can digest nucleic acids into nucleotides only if there is a free end; endonucleases can cut DNA or RNA in the middle of a nucleic acid molecule.  As a result, circular genomes are sensitive to endonucleases, while linear genomes are sensitive to both exonucleases and endonucleases.

The virus genome can be contained within one continuous nucleic acid molecule, or the viral genome can be divided into segments. The genome of the influenza virus, for example, contains eight linear ssRNA segments.

A bacterial chromosome has the following features:

The genome of a eukaryotic cell is subdivided into multiple chromosomes. Each eukaryotic chromosome is a single linear double-stranded DNA molecule that is approximately 10–100 million base pairs (bp) in length (see Figure 1.2).

Moderately repetitive sequences also include DNA sequences of unknown function. A good example of this type of moderately repetitive sequence is the variable number tandem repeat (VNTR) sequences. VNTRs are typically 15 to 100 base pairs long, are often located between genes, and are present in multiple copies repeated along the length of the chromosome. The number of VNTR repeat copies is unique to each individual. As a result, this variation in VNTR repeats is the basis of an important forensics technique called DNA fingerprinting (see Figure 1.4).

The centromere region (CEN region) of the chromosome contains highly repetitive DNA. In humans, the CEN region is approximately 106 base pairs long, consisting of a tandem repeat of many copies of a particular 170 base pair sequence. Tandem repeats are copies of the same DNA sequence repeated many times in a row along the chromosome.

The Alu family of sequences in humans is another good example of a highly repetitive sequence. An individual Alu sequence within the human genome is only 300 base pairs long; however, there are so many copies of this Alu sequence that approximately 10% of the human genome is thought to be composed strictly of Alu sequences (see Figure 1.5). Some of these Alu sequences are particularly interesting because they have the ability to move from one location in the genome to another. DNA sequences that can move in this manner are called transposable elements. 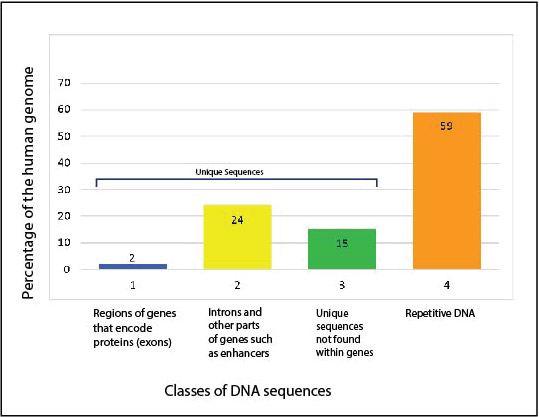 The telomeres of eukaryotic chromosomes have the following features:

In terms of centromere location, chromosomes are classified in the following ways:

A set of rules has been established to number the human chromosomes based on the size, centromere location, and banding pattern. Additionally, the dark and light bands that result from chromosome staining are numbered within a chromosome. This numbering assists in determining where chromosome mutations occur and helps to delineate the exact location of the chromosome abnormality. For example, band 22q12 refers to chromosome 22, the long arm (q), region 1 (closest to the centromere), band 2. If a deletion removes a portion of chromosome 22, the exact location of that deletion could be identified based on this numbering system.