The lac operon provided an excellent example of how bacteria perform gene regulation in response to an environment that lacked glucose yet contained lactose.  In the case of the lac operon, we learned that gene regulation involves an activator protein (CAP) and a repressor protein (lac repressor).  Effector molecules (cAMP and allolactose) regulate CAP and the lac repressor binding to DNA sequences near the lac operon structural genes.  Ultimately the binding of the CAP and the lac repressor proteins determined if sigma (σ) factor protein and the RNA polymerase core enzyme could activate transcription.

Even though gene regulation in prokaryotes and eukaryotes is similar (both involve activator proteins, repressor proteins, and effector molecules), eukaryotic gene regulation is more complex.  This complexity is needed to produce multicellular eukaryotic organisms with cells in each tissue having unique phenotypes.  For example, a white blood cell (leukocyte) and a muscle cell have the same collection of structural genes; however, gene regulation ensures that a leukocyte expresses leukocyte-specific proteins, while a muscle cell expresses muscle-specific proteins.  Further, many eukaryotic organisms progress from a fertilized egg through complex developmental stages to produce the mature adult organism.  Gene regulation ensures that embryonic genes are expressed only during embryonic development, while other genes are expressed only in an adult.

We learned earlier this semester that transcription in eukaryotes involves several types of DNA sequences.  The core promoter, for example, determines where RNA polymerase II will bind to the DNA and begin transcription.  The core promoter includes the TATA box (-25 sequence), which serves as the binding site for the general transcription factor protein TFIID and the +1 site, the first base in the template DNA strand that is transcribed by RNA polymerase II.  For transcription to occur, the TATA box and the +1 site must be present.  If these two sequences are the only sequences present upstream of a gene, the gene will be transcribed at a low, yet constant rate (the basal level of transcription).

Recall that the mediator protein complex communicates the signals from activator and repressor proteins to RNA polymerase II.  Mediator thus serves as a link between transcription factors that bind to enhancer and silencer DNA sequences and RNA polymerase II, thereby determining the overall rate of transcription.

The structural motifs found in transcription factors contain α-helices, a type of protein secondary structure. An α-helix is produced when certain amino acids in the polypeptide sequence interact through hydrogen bonding to produce a helical structure.  An α-helix is the proper width to bind to the major groove in DNA.  Thus, the α-helix is often used by transcription factors proteins to recognize specific nucleotide sequences in the major groove of DNA.

The four common structural motifs that are found in transcription factor proteins include (see figure 14.3):

Note that for a particular gene, one or more of the above mechanisms may be involved in regulating gene expression.

Suppose an activator protein binds to an enhancer DNA sequence (see figure 14.4).  This activator protein then encourages TFIID to bind to the TATA box, and TFIID then recruits the other general GTFs and RNA polymerase II to the +1 site.  As a result, transcription is up regulated.

Suppose an activator protein binds to an enhancer DNA sequence (see figure 14.5).  The activator protein in turn activates mediator, and mediator then activates the general transcription factor TFIIH.  Next, TFIIH acts as a helicase to separate the template and coding DNA strands.  TFIIH also acts as a kinase, phosphorylating RNA polymerase II to begin transcription.

Note that the DNA between the enhancer/silencer DNA sequences and the core promoter can form a loop to permit the proteins described above to bind to each other.

Glucocorticoid hormones can increase the transcription of a gene above the basal level as follows (see figure 14.6):

An Example of Transcription Activation (CREB)

Arrangement of Chromatin at the β-globin Gene

The results from fibroblasts and erythroblasts discussed above suggest that nucleosomes can be altered to influence transcription.  Alterations in chromatin structure to promote transcription include the covalent modification of histone proteins and the rearrangement of nucleosomes by ATP-dependent chromatin remodeling (see figure 14.9).

Covalent modification involves the acetylation, methylation, and phosphorylation of histone proteins within nucleosomes.  Acetylation will serve as an example of the covalent modification of histones.  Enzymes called histone acetyltransferases (HATs) add acetyl groups to the tails of histone proteins.  Specifically, acetylation neutralizes the positive charge on lysine amino acids within the histone tail, disrupting the interaction between the histone tail and the negatively charged DNA backbone.  Neutralization of the positive charges on the histone tails cause the histones to release from the DNA; the DNA is now accessible for transcription.

When transcription needs to be turned off, the histones can be modified using histone deacetylase (HDAC) proteins.  HDACs remove the acetyl groups from histones, restoring the positive charge on the histone tail.  As a result, the histone tails once again bind to the negatively charged DNA backbone, and the chromatin is converted to the closed conformation (heterochromatin), decreasing transcription of the gene. 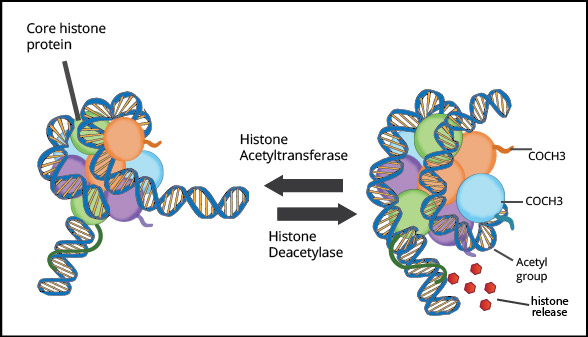 Silencing of gene expression in many eukaryotes involves the methylation of DNA sequences near genes.  The methyl group that is added to the DNA double helix blocks the major groove of the DNA, preventing the binding of activator protein to the DNA. Cytosine bases within CG-rich sequences called CpG islands are typically targets for methylation.  Not surprisingly, many CpG islands are located near the core promoters of genes (see figure 14.10).  Typical CpG islands are 1,000 – 2,000 base pair (bp) long sequences that contain multiple CpG sites (i.e., many 5’-CG-3’ sequences in a row).  Within CpG islands, adding methyl groups to the cytosine bases on both DNA strands is called full methylation. Full methylation inhibits transcription.

Methylation of DNA explains a phenomenon called genomic imprinting.  In oogenesis (egg cell formation) or spermatogenesis (sperm cell formation), a specific gene is methylated by de novo methylation.  Following fertilization, the methylation pattern is maintained as the fertilized egg begins to divide.   For example, if the maternal allele for a gene is fully methylated, that maternal allele remains fully methylated in the cells of the offspring.  We will discuss genomic imprinting more in Part 15.

In eukaryotes, the processes that regulate the expression of one gene (activators/repressor proteins bound to enhancer/silencer DNA sequences, altering chromatin structure, and DNA methylation) do not necessarily influence the regulation of an adjacent gene.  DNA sequences called insulators function to define the boundaries between genes (see figure 14.13); an insulator sequence ensures that the gene regulation processes that affect one gene do not affect nearby genes.

Fill in the blank: